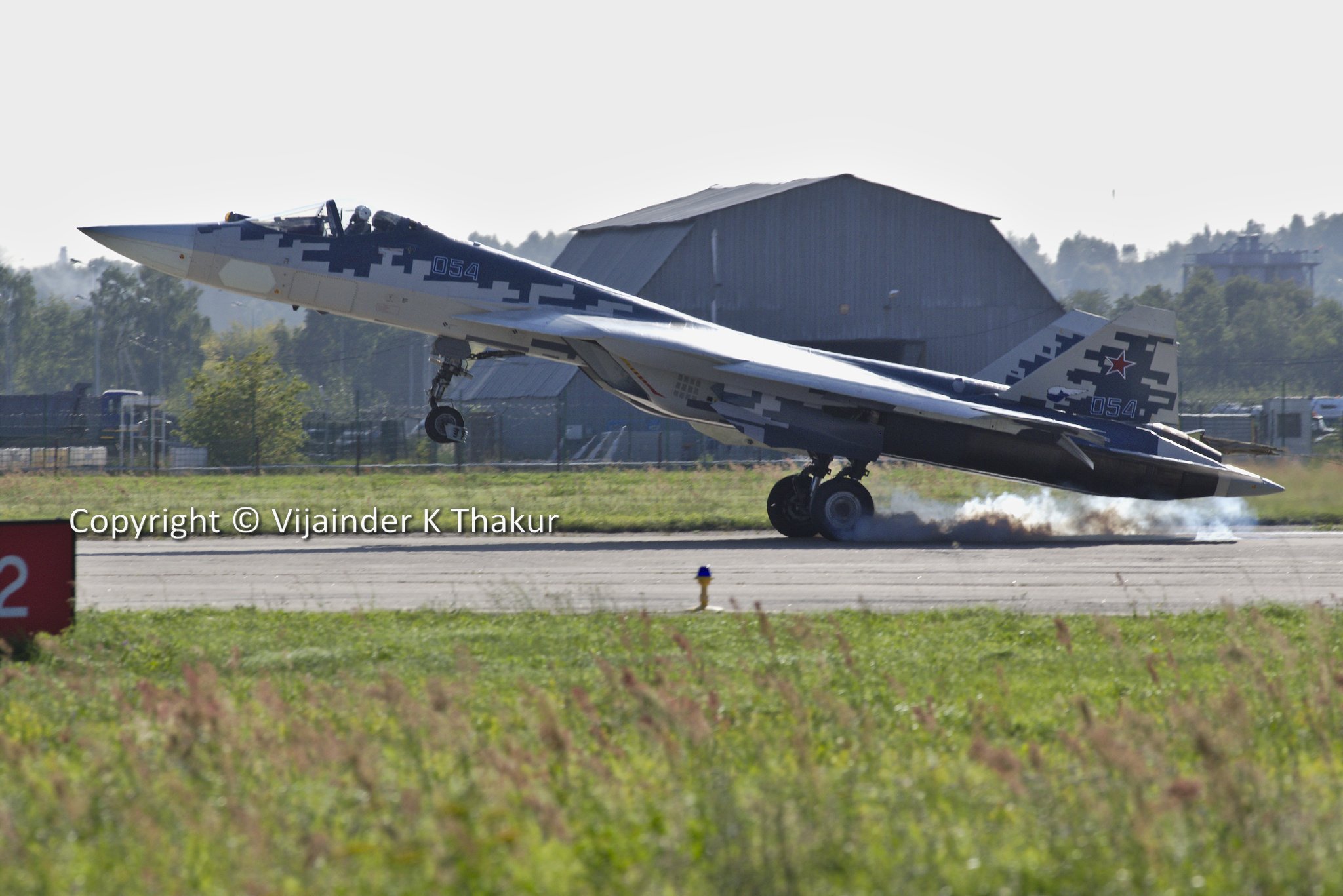 Speaking on the sidelines of the Dubai Airshow 2019 in the UAE on November 18, 2019,  Sergey Chemezov, head of  Russia's Rostec, indicated that India and the UAE "have been considering and discussing buying the Su-57 "for a long time, though no decision has been delivered yet."

“The Russian side proposed to localize the production of individual components of the export version of the Su-57 in countries [that are interested,] we are talking about India, the United Arab Emirates, Turkey”

"Localization [has been offered] ... It does not matter whether it is [the] United Arab Emirates, India or Turkey, we will rely on what they can do"

“If there are simply no such technological capabilities in the country, then it is simply impossible to do this,” S. Chemezov noted. 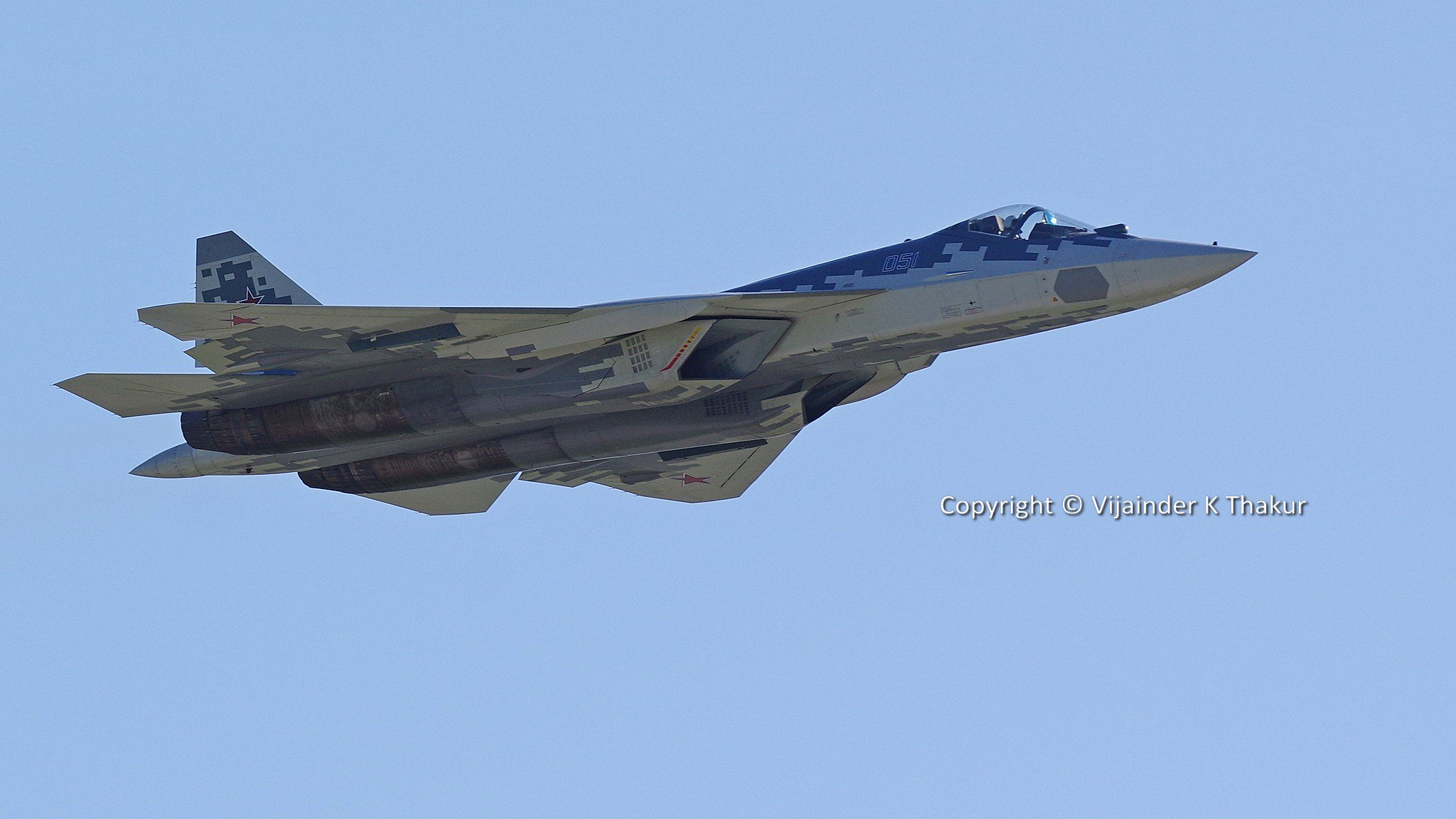 During his visit to Russia in July 2019, the former Chief of Air Staff (CAS) Air Chief Marshal Birender Singh Dhanoa had stated that the IAF will have a look at the Su-57 only after it joins active service with the Russian Air Force. Russian Aerospace Force has ordered 76 Su-57 jets, the first of which is scheduled to be delivered by the end of 2019.

During the annual press conference on October 5, 2019, ahead of the Air Force Day on October 8, 2019, the current CAS, Air Chief Marshal RKS Bhaduria said in response to a question from the press, “On the fifth generation (requirement), the AMCA has been given a go ahead and we have given it our whole support and are putting in our energies there. No import is planned in the foreseeable future.”

The remarks  were widely interpreted as ruling out import of any 5th gen fighter. However, they could also be interpreted as reiterating what the former CAS said - that at the appropriate time acquisition of the Su-57 could be considered.

It's likely that the IAF and the government are keeping their options open on the issue. Since Russia is unlikely to export the Su-57 before its own requirement of 76 aircraft is fulfilled there is no reason for India to commit at this stage.

The AMCA is projected to enter operational service in 2035, if ADA and HAL stick to their timelines. Whether or not the IAF can fulfill its mandated role for the next 15 years without 5th gen fighter technology would depend on how threat perceptions play out. Here it's relevant to note that ADA / HAL have yet to demonstrate any of the critical technologies that would be required for the AMCA - LO shaping with super maneuverability, sensor fusion, super cruise, secure low probability of intercept high bandwidth data link and the ability to function as command center for other aircraft, including attack drones, when performing joint operations. As such, the ADA / HAL projected timeline looks overly optimistic.

Over the next 15 years, there are likely to be just two operational 5th generation fighters - Lockheed Martin's F-35 Lightening 2 and Su-57. The F-35 is unlikely to find favor with the IAF because Lockheed retains control over the stealth fighter's software even when selling it to the USAF.

The choice before the IAF is to wait for the AMCA, or to acquire some Su-57s while it waits for the AMCA! There following are some factors that the IAF would well to keep in mind while exercising its choice. 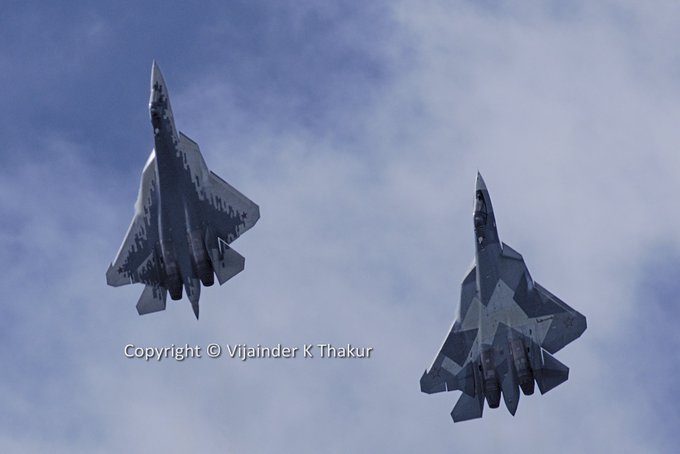 Sergey Chemezov's statements at Dubai seem to suggest that Russia has drawn a clear line as to the extent and type of localization that it will agree to. If India were to purchase the Su-57, Russia would be willing to source any Su-57 component that India is in a position to manufacture and supply. It will not transfer technology to India to help make components locally as part of the deal!

Here it is relevant to point out that unlike the F-35, which relies primarily on its radar frequency low observability (RF LO) to safely operate in contested airspace, the Su-57 uses a combination of RF LO, electronic warfare (EW), supermaneuverability, and laser blinding of missile seekers to remain safe in contested airspace. As a result, the Su-57 features a powerful defensive suite laden with sensors, jammers and laser emitters that are not well known to the West. Under the circumstances, Russia's desire to limit localization is reasonable.

The Su-57 has generated a lot of interest in the middle east with Turkey and UAE openly negotiating and Saudi Arabia a future prospect. The reason for the interest is simple to understand - the US will not sell the F-35 to these countries because of the threat such sales would pose to Israel. Russia is keen to seize the opportunity and fill the gap not just to increase its arms sales but also to increase its clout in the Middle East. Under the circumstances, it wouldn't in India's long term strategic interests to play coy for too long.

Posted by Vijainder K Thakur at 3:26 PM No comments: 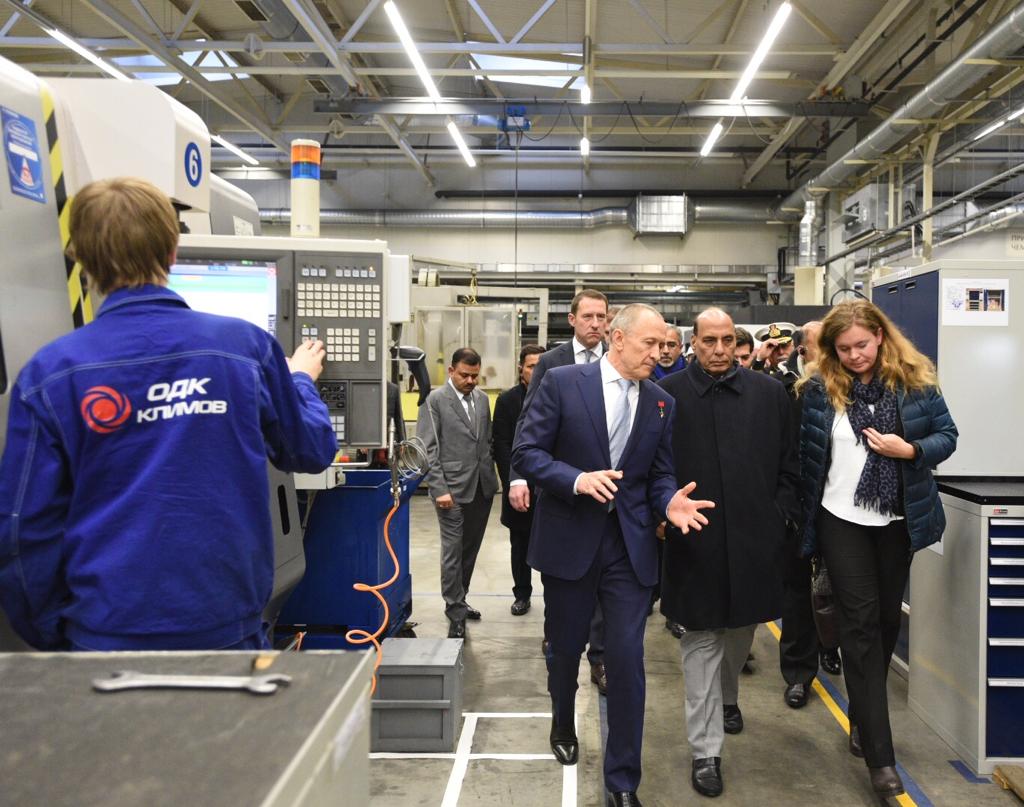 During his recent visit to Russia from November 5 to November 7, 2019, India's Defense Minister, Rajnath Singh, visited Saint-Petersburg based UEC-Klimov (which is incorporated in United Engine Corporation of State Corporation Rostec).

Klimov is the largest developer and manufacturer of engines for Military and Civil aircraft in Russia.

During the visit the Indian Defense Minister was briefed on the product range of the enterprise and key stages of the production process and taken on a tour of the mechanical, assembly and test workshops.

The TV7-117ST is turboprop engine which powers the Ilyushin IL-114 regional transport aircraft. 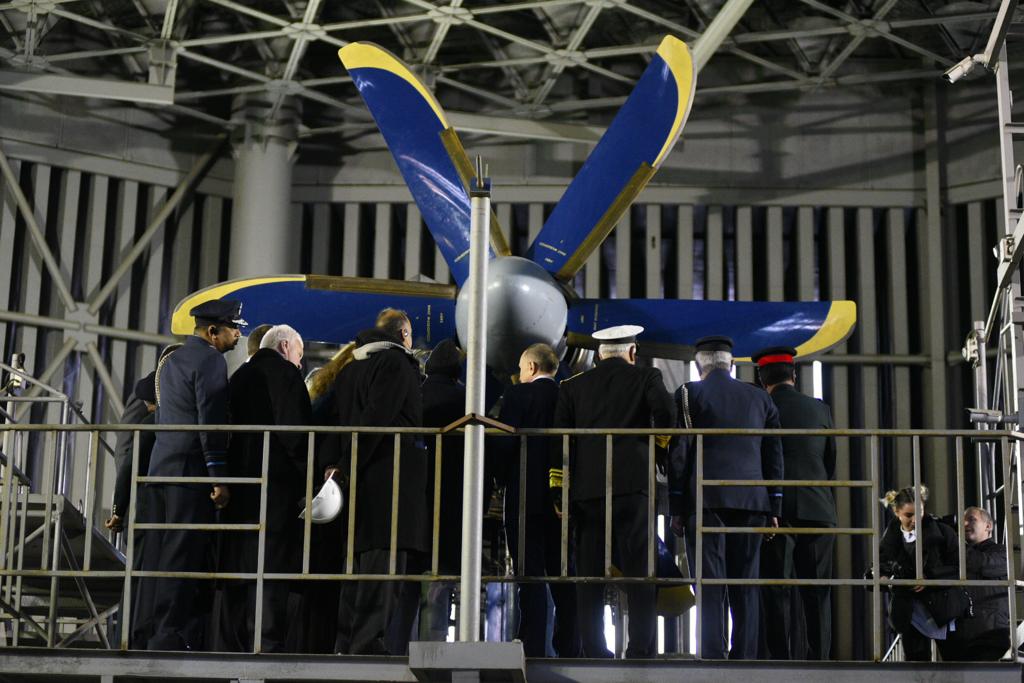 The Indian defense minister being briefed on the six-blade Aerosila AV-112 propeller fitted on the TV7-117ST engine. 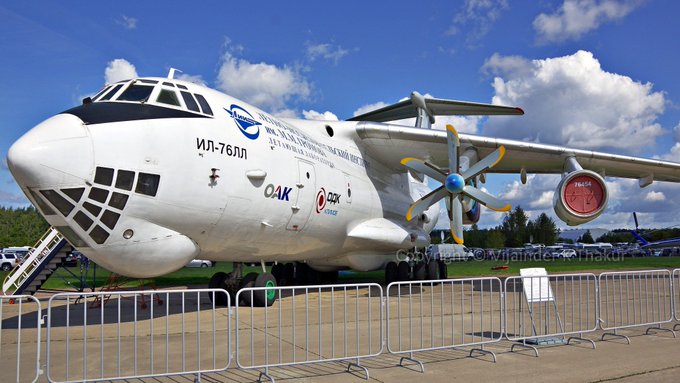 
The IL-114-300 is a 52-64 seat analog of the ATR-42. India's state owned aircraft manufacturer, Hindustan Aeronautics Limited (HAL), is reportedly planning to make the IL-114-300 in India as a regional airliner for domestic airlines.

HAL has tied up with Ilyushin, initially to provide maintenance support for the IL-114-300 in India and later to assemble the plane in the country.

In September 2019, HAL chairman R Madhavan was quoted in the report as saying,
“Ilyushin is working on civil certification of this aircraft, that is likely to come by 2021. After that they get European (aviation regulator) certification also for using this aircraft in civilian space. We signed a non-disclosure agreement with Ilyushin for doing maintenance of this aircraft in India for its customers from India and nearby countries.”

Configured as a military transport, the IL-114-300 could also replace the 100 odd Antonov An-32 aircraft of the IAF. There is also a maritime variant, IL-114MP, which too could be of interest to India.

The TV7-117V turboshaft engine is a helicopter powerplant version of the TV-117SM engine. Two TV7-117V turboshaft engines, each of 1753 kW power rating are fitted on Russia's newest transport helicopter Mi-38. The Mi-38 was unveiled at MAKS-2019 and made its international debut at the Dubai Airshow 2019. It's a transport helicopter designed and built with focus on passenger safety and comfort, environmental friendliness, and low noise on the ground..

The Mi-38 can be operated in a wide range of climatic conditions, including marine, tropical and cold climates. The high altitude performance of the helicopter is an important USP. The Mi-38 set a world record reaching an altitude of 8,600 meters, which is almost as high as Mt. Everest [8,848 meters]. 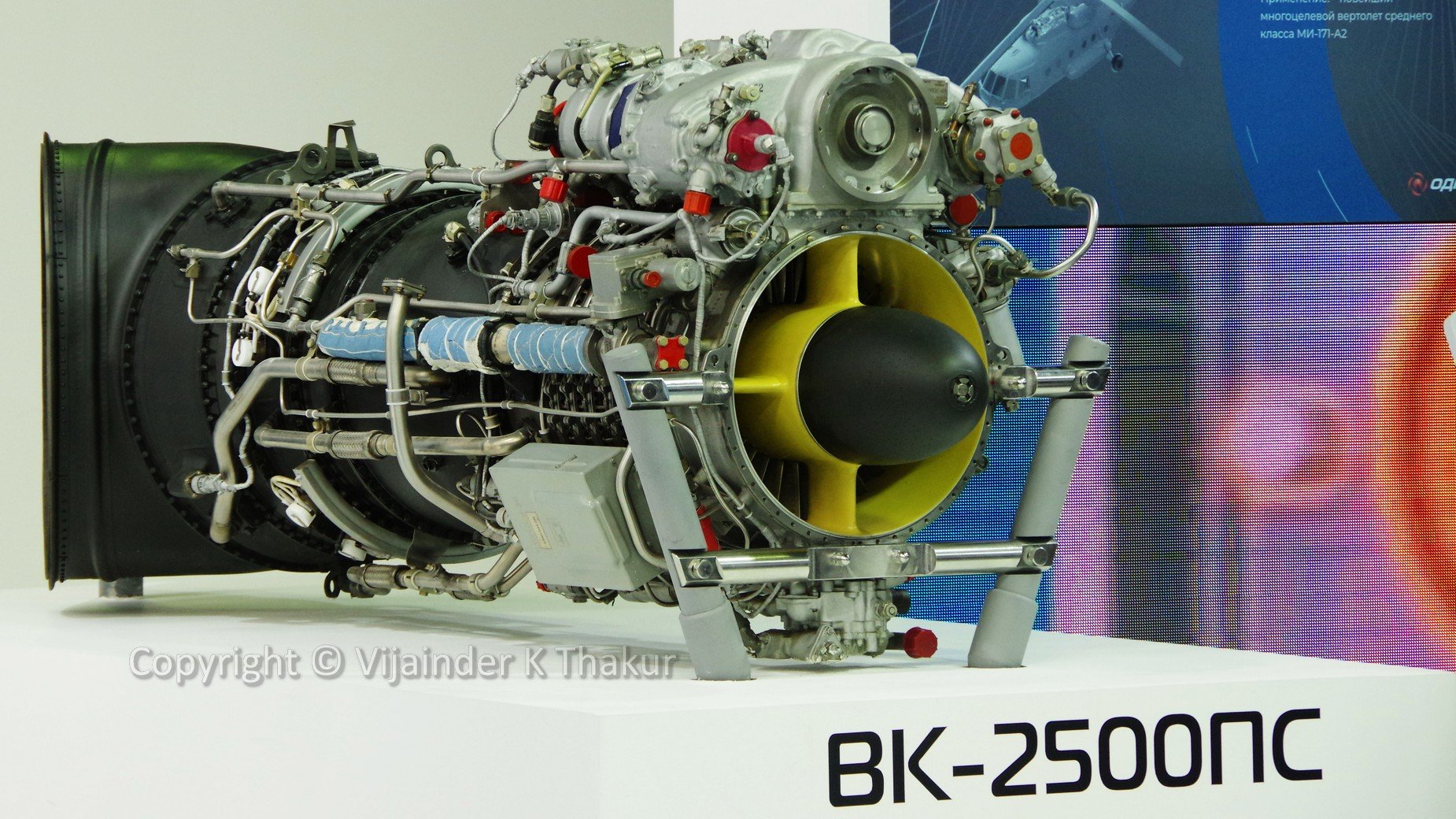 
The Indian Air Force (IAF) currently has around 151 Mi-17V-5 helicopters powered by the TV3-117 engine, the last of which were delivered in January 2016. Russia is proposing that the IAF upgrade its Mi-17V-5 fleet to the Mi-171A2 standard powered by VK-2500PC engines. Besides more powerful and efficient engines, the Mi-171A2 features upgraded main rotor, gear systems and fuselage and advanced avionics. The total number of improvements exceed 80.

The RD-33MK engine has higher thrust, higher reliability and a longer service life of up to 4,000 hours.

During the meeting with the top management of the enterprise Shri Rajnath Singh put a high value on the scientific-design capacities of JSC “UEC-Klimov”, the quality and the scale of the up-to-date production complex.

Posted by Vijainder K Thakur at 8:59 AM No comments: