RCI is developing a 275 kgf thrust Small Gas Turbine Jet Engine (SGTJE) to power a UCAV capable of cruising at 0.8M at SL.

RCI will take assistance from NAL's Propulsion Division for design and analysis, engine cycle analysis and configuration of the turbojet engine.

RCI has also sought private sector, Indian or foreign, participation in the detailed design of the 275-kgf thrust SGTJE.

Project duration is specified as one year from project start.

The engine is required to be air start capable suggesting it is being developed for a cruise missile. The 275-kgf thrust requirement suggests a relatively smaller, possibly air launched, cruise missile.

It maybe noted that the Nirbhay, powered by a 500-kgf thrust Saturn engine, would hopefully be replaced by the 425-kgf Manik engine being developed by GTRE.

Besides RCI and GTRE, HAL is also developing a 400-kgf thrust Small Gas Turbine for Strategic Application,, based on the PTAE-7 which powers the Lakshya PTA.

DRDO plans to display a Rustom-2 1/3 rd scale model during Republic Day 2016 and has released a RFP for building the model.

Based on the dimensions of the model published in a RFP, the Rustom-2 MAL UAV has a wingspan of 20.4m and length of 10.1m.

In comparison, IAF's Israeli developed Heron MALE UAV, which the Rustom-2 is being developed to replace, has a wingspan of 16.6m and length of 8.5m.


It remains to be seen if the Rustom-2's larger dimensions translate into better performance and capabilities. DRDO says the Rustom-2 would be able to carry 350-kg payload against the Heron's 250-kg, but the single engine Heron has a marginally better (40hr vs 35hr) endurance.

The Rustom-2 will have a strike capability. It will loiter autonomously at high altitudes performing ISR with its SAR nd EO sensors. When a target is identified, it will either illuminate the target with a laser designator for other strike aircraft, or descend to lower altitude and attack the target with its own air-to-surface missiles.

DRDO's decision to display the scale model raises hopes of a first flight in the near future. DRDO had initially hoped to test fly a manually piloted variant of the UAV by June 2014. It now appears that the test flight program has been pushed back till a ATOL is developed for better flight safety.

For additional information visit the link below

Posted by Vijainder K Thakur at 7:30 AM No comments:


Following an in principle agreement between India and the US to cooperate in jet engine and aircraft carrier design and construction under DTTI, arrived at during US President Obama’s visit to India in January 2015, the two nations have been discussing the scope and modalities of the cooperation.

Two rounds of discussions are known to have been held already, more are planned.

Surprisingly, US Assistant Secretary of State for South and Central Asia Nisha Desai Biswal, in her recent address to the annual meeting of Association of the US Army, said, "We're now helping India develop aircraft carrier and jet engine technology as part of our Defense Technology and Trade Initiative, which Secretary Carter launched back in 2012."

Her statement suggests that cooperation has already started. If it has, it's probably based on a level of agreement already reached.

While the Aircraft Carrier development cooperation would focus on EMALS, the agreement on jet engine technology would focus on a hot engine power plant for the AMCA based on the F414 Enhanced Performance Engine (EPE).

If the Assistant Secretary's statement is indeed true, it is possible that the Indian government will soon sanction and fund the AMCA project, clearing the way for preliminary design of the aircraft to commence.

The AMCA configuration has been frozen in consultation with the IAF. The project was awaiting choice of an engine.

The finalization of the AMCA power-plant would explain the IAF Chief's optimism on the AMCA, evident during his recent press conference.
Posted by Vijainder K Thakur at 8:54 AM No comments:

The helicopter, which was conceived as a multi-role helicopter, is now limited in its operational role because of excess weight and limited engine power.

The Dhruv fleet has been grounded several times due to technical snags.

The Indian Army has experienced at least 18 accidents since 2002.

According to MoD (July 2015), since the induction of the helicopter in AFs in year 2001, 08 (Eight) major accidents (write offs) have taken place, all of which, have been investigated by a Court of Inquiry as per extant instructions. Necessary modifications/upgradations have been carried out, on the basis of past experience, to cater to Defense Forces’ requirements.

Four out of the 7 Dhruvs delivered to the Equadorian Air Force were involved in crashes. Two of the crashes (enumerated above) resulted in the helicopter being written off. Of the four crashes, 2 were attributed to pilot error and 2 to mechanical failure.

According to the ET, an Indian CAG report has pointed that ALH crashes have taken place due to a design flaw that leads to a loss of control when it is being rolled back from a left turn.

IDP Sentinel members can read more about the Dhruv at the link below.

The Russian ministry of defense posted the following video that purportedly shows Kalibr-NK cruise missiles being launched from ships deployed in the Caspian sea.

The range of the targets from the launch point in the Caspian sea exceeds 500-km.

The minister of defense told the president that the actual range was "more than 1,500 km."

According To Sputnik News the missiles traveled 1,500 km through Iranian and Iraqi airspace and struck terrorist positions in Raqqa, Aleppo and Idlib provinces, reportedly destroying all.

Sputnik News reports that the missile was first launched in 2012. It can travel 50 to 150 meters above the ground and hit sea targets up to 350 kilometers away and ground targets more than 2,500 kilometers away. Their maximum deviation from the designated target is only three meters.

The name Kalibr-NK suggests that the missile is a variant of the 3M-54 / 3M-14 Kalibr (NATO designation SSN-27A 'Sizzler') family of missiles that equip Russian Navy submarines and surface ships.

All export variants are restricted to 300 km range.

Washington Post reports that Russia conducted a flight test of the NK-Kalibr on September 11, 2015, a month before firing the missiles from the Caspian Sea. The NATO designation for the missile, which has capabilities similar to the US Navy Tomahawk, is SSN-30A (3M-14T). During the test, the missile traveled some 2,000 kilometers, or about 1,200 miles.

The missile was tested earlier in August 2015, at which time US officials said it was nearing deployment. The new missile can be armed with either nuclear or conventional warheads.

According to some western reports, four of the missiles launched against targets in Syria malfunctioned and landed in Iran. Russia and Iran have rubbished these reports.

Operational use of Kalibr-NK has prompted NATO military intelligence analysts to upgrade its status to "deployed."
Posted by Vijainder K Thakur at 11:51 AM No comments: 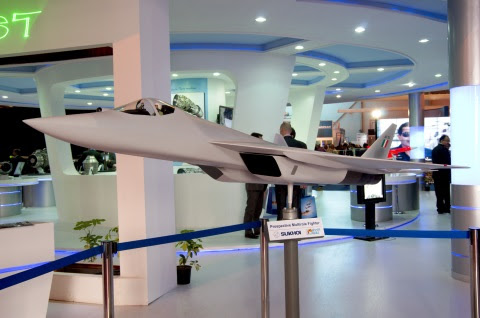 Is Russia really the problem in the unraveling FGFA deal?
Posted by Vijainder K Thakur at 10:57 AM No comments: