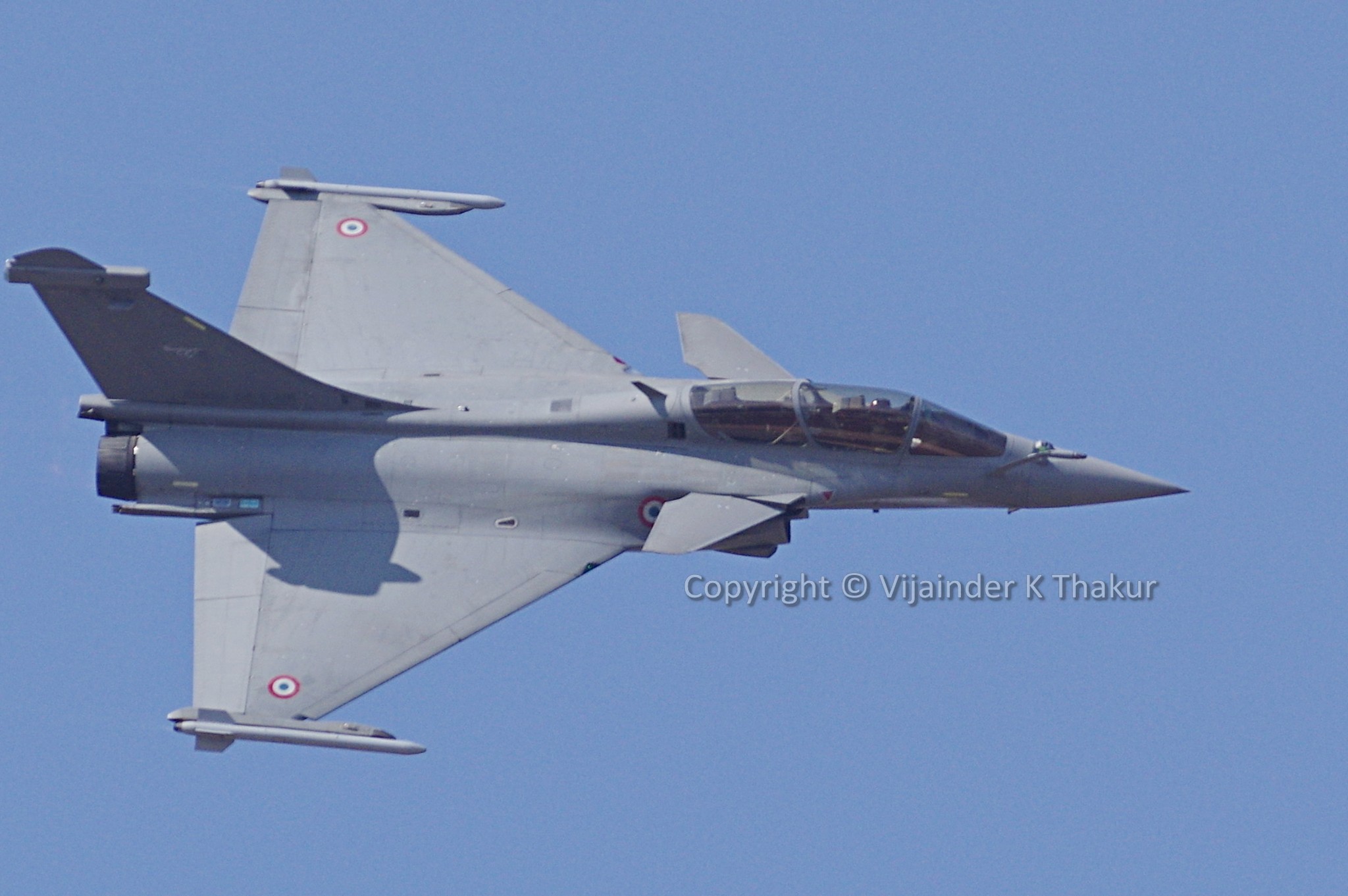 Comparing the J-20 and the Rafale, to use a cliche, is like comparing oranges and apples. The two fighters were conceived and developed for completely different roles. However, the adversarial deployment of the two fighters in the context of the simmering India - China border dispute has fanned nationalist fervor and clamor for a comparison to such an extent that comparing oranges and apples seems perfectly logical.

Also, the Global Times, piqued by the claim of the former COAS that the Rafale is superior to the  J-20, has, without presenting a shred of evidence, fired a broadside trashing the Rafale as a generation behind the J-20 and claiming that the Rafale will "find it very difficult to confront a stealth-capable" J-20.

Well, it's time for fools to rush in where angels fear to tread. I may be a fool, but not a very verbose one, so I will confine this comparison to the BVR combat capability of the two fighters, because no one in their senses, not even the Global Times, will contend that the J-20 is superior to Rafale in WVR combat.

BVR combat capability is largely dependent on - the extent and capability of AWACS cover, RF signature, sensor suite, self defense suite, Man Machine Interface (MMI), and air-to-air missile range. For the comparison, we will assume a Rafale armed with Meteor and a J-20 armed with PL-15. Both feature dual pulse propulsion (A second stage ramjet in Meteor & a solid fuel rocket sustainer in PL-15) for thrusted end game maneuvering, max range of over 150-km, and an active seeker.

The J-20, which features full extent frontal aspect and limited extent side aspect LO shaping has a significantly lower radar signature than the Rafale which features limited extent frontal aspect LO shaping only. Both aircraft use RAM (Radar Absorption Material) and possibly some classified features to further reduce their RF signature. As far as RF signature goes, it's undoubtedly advantage J-20!

A better max detection range combined with the PL-15 air-to-air missile capable of leveraging the better range would give the J-20 a first to shoot advantage over the Rafale in BVR engagements.

However, the lack of sophistication of LPI (Low Probability of Intercept) features employed in the J-20's AESA radar could possibly negate the longer detection range  advantage. Once switched on, the higher radiating power of the J-20 AESA would be like a more powerful search light in a dark tunnel. It would see longer, but it would also be seen from longer. The Radar would be picked up by the RF sensors on the Raale completely negating the RF low observability of the J-20.

AESA radars leverage their control over individual T/R modules to scan and track while rapidly hopping frequencies over a wide spectrum making it difficult for RF sensors on adversary aircraft to track the radar. Hence the term LPI.  The question here is - how good is the LPI capability of the J-20 AESA? If it's not good enough against Rafale sensors, the longer range of the J-20 could well become a liability that is best avoided by keeping the radar switched off!

It's possible that the J-20 has the advantage with its AESA, however, we cannot be definite.

Data linked with and under control of an AWACS the J-20 would pose a formidable challenge to all IAF fighters including Rafale. With the AWACS providing situational awareness and target tracking information, there would be no need for the J-20 to switch on its powerful AESA radar and risk revealing its own position. It's conceivable, even likely, that the J-20 has the ability to relay tracking information obtained from the AWACS providing cover, to the PL-15 missile till it picks up the target on its own little AESA.
Since J-20 has good RF stealth, IAF AWACS would not be able to obtain a weapon grade track on it to similarly advantage the Rafale.
Under AWACS cover it would be advantage ++ for the J-20

The optical detection and tracking system on the Rafale, referred to as OSF-IT, facilitates passive long-distance detection and target identification before engagement. Located ahead of the cockpit on the dorsal section of the front fuselage, it comprises  two sensors -  the main IR detector that serves as FLIR with upto 100-km range on the left and TV/IR sensor/Laser ranger on right which  facilitates optical identification of targets upto 40 km away. Optical identification is considered imperative to rule out friendly fire fratricide.

One of the India Specific Enhancements (ISEs) sought by the IAF on the Rafale is an IRST, an indication perhaps that the existing OSF-IT is somehow constrained by the need for optical recognition and the IAF would prefer an IRST that allows pilots to passively engage targets, including stealth targets, at long ranges. Here it is pertinent to point out that the J-20 doesn't have IR stealth and as such would be prone to easy passive detection using IR, with detection range varying with weather and altitude.

With little or no reliable information available on the capabilities of the EOTS-89 on the J-20, it's moot which aircraft enjoys an advantage over the others.

In all probabilities Rafale has the advantage, but we cannot be definite.

It's possible to negate the first shot advantage of an adversary fighter through a very capable defensive suite. The SPECTRA integrated electronic warfare and defensive suit of the Rafale is one such very capable system. It provides  a multi-spectral threat warning capability against hostile radars with long-range detection, identification and accurate localisation of infrared, electromagnetic and laser threats.

The system incorporates radar warning, laser warning and missile warning receivers for threat detection plus a phased array radar jammer and a decoy dispenser for threat countering . It also includes a dedicated management unit for data fusion and reaction decision.

Perhaps the most potent feature of the SPECTRA is its deep integration with Rafale's systems. For example, the SPECTRA can jam or confuse enemy RF emitters using the RBE2 AESA.

The ability of the SPECTRA to automatically jam or seduce an active homing PL-15 would completely negate any advantage accruing to the J-20 from its stealth and more powerful AESA.

The Rafale has other very sophisticated features. For example, its concept of a defensive bubble. Once breached, the Rafale starts its "tandav"  dance that  may include firing its Mica all aspect missile backwards, releasing chaff and flares. Not surprisingly, there is a ISE for a towed decoy system.

The J-20 can fire a PL-15 but it cannot ensure the missile will hit the Rafale!

Finally, a long shot missile can be evaded by energetic maneuvering, claims of a missile no escape zone notwithstanding. The IAF demonstrated this capability during Operation Swift Resort on February 27, 2019, when Su-30MKIs outmaneuvered PAF F-16 launched AIM-120D AMRAAM missiles. Indeed, the maneuverability and internal EW capability of a Rafale would make it as invulnerable to a missile with a radar seeker  as a Su-30MKI with Khibiny EW wingtip pods.

Both Rafale and J-20 are single seat fighters with a lot of sensors - active and passive. How effectively a lone pilot can leverage the sensors would depend on the extent of sensor fusion and the effectiveness with which the threat situation is conveyed to the pilot through the HMI.

The Rafale has a more sophisticated HMI. For short-term actions, it features a wide-field-of-view holographic HUD. For medium and long-term actions, analysis of the tactical situation as a whole (the “big picture”), the Rafale features a multi-image “Head-Level Display” (HLD). The HLD picture is focused at the same distance as the HUD picture to allow for fast eye transitions between head-up and head-down displays and the external world’s view.

Once the combat starts, the pilots rely on HUD and HOTAS (Hands on throttle and stick). As far as HMI goes, it's advantage Rafale.

The J-20's is undoubtedly the more stealthy of the two fighters.

Considering how little we know about the J-20's AESA and EOTS-86 Electro-optical Tracking System, it would be wrong to assume they are inferior to their analogs on the Rafale. However, since secrecy is usually employed to hide a weakness, not a strength, it's likely that the J-20 sensors are not at par as those on the Rafale. However, it is also likely that with the passage of time, J-20 sensors will improve.
Flying under AWACS cover, the J-20 would be a dangerous platform best avoided by the Rafale. The problem is, the J-20's front aspect stealth is good that it may not be possible for a Rafale to avoid butting heads with it.

The Rafale almost certainly enjoys a significant advantage over the J-20 with its more advanced HMI and SPECTRA defensive suite.

Finally, Rafale's better maneuverability gives it a better chance of evading a BVR missile like the JL-15 that comes through its defensive bubble. The J-20's ability to outmaneuver a Meteor would be close to non-existent.