When the US withdrew from the ABM treaty in June 2002, Russia indicated that it would develop hypersonic glide vehicle (HGV) warheads to counter any anti ballistic missiles systems that the US deployed to ensure the efficacy of the Russian nuclear deterrent.
On  March 1, 2018, during a presentation to the Federal Assembly,  President of the Russian Federation, Vladimir Putin, unveiled a hypersonic maneuvering HGV warhead (later named Avangard) capable of penetrating deployed US ABM systems. He also unveiled an air-launched surface attack HGV capable of carrying a nuclear or conventional warhead. The HGV was later named Kinzhal.
On December 27, 2019, RuMoD announced that the first regiment of Avangard hypersonic missile systems had gone on combat duty.
"Russian Defense Minister Army General Sergei Shoigu reported to Russia’s President Vladimir Putin that the first missile regiment armed with the latest Avangard strategic missile system with the hypersonic boost-glide vehicle assumed combat duty from 10:00 a.m. Moscow time on December 27, 2019," the ministry said in a statement.
In February 2020, Russia's Central MD commander announced that Kh-47M2 Kinzhal ALBMs will be deployed on MiG-31s in the 712th Fighter Aviation Regt at Kansk by 2024. The MOD has said 10 Kinzhal carriers are already on "experimental combat duty.
The two HGVs were among the 6 new strategic weapons unveiled by President Putin which included a nuclear powered torpedo with a thermonuclear warhead (Poseidon), a heavy intercontinental ballistic missile (Sarmat), a high-energy laser weapon (Persevet) and a nuclear powered cruise missile (Burevestnik).
In addition to the two HGVs unveiled on March 1, 2018, Russia is close to deploying a anti shipping hypersonic cruise missile - Tsirkon.
President Putin's March 1, 2018 speech and the subsequent operational deployments was clearly intended to convey the message that Russia has the technical expertise and the political will to maintain the credibility of its nuclear deterrent.
While developing hypersonic weapons to counter growing US anti missile capability, Russia remained aware of the inevitability of its adversaries eventually acquiring the same technology and started to develop technology to counter hypersonic weapons!
In June 2020, while speaking to Russia-1's Vesti Nedely program on his government's work to gain an edge in the field of new strategic systems, President Putin reportedly said,  "I think that we can pleasantly surprise our partners with the fact that when they [get] these (hypersonic) weapons, with a high degree of probability, we will have a way of combating against them.”
In the following paragraphs, I present a roundup of the progress made by Russia in countering adversary hypersonic weapons.

On October 24, 2020, Russian military expert Igor Korotchenko, claimed on Radio Sputnik that the Russian military industry was already testing a missile system capable of shooting down enemy hypersonic missiles.
According to him, during a series of tests conducted a few months ago, the S-300B4 system demonstrated the ability to intercept and shoot down operational-tactical and, most importantly, hypersonic missiles, including those under development around the world.
The capability to engage hypersonic targets was based on a newly developed 400-km range missile of the S-400B4 system developed ammunition, which has a range of up to 400 km.
Igor Korotchenko claimed on Sputnik radio that the new missile system was presented at the Army 2020 exhibition, which took place this year in Russia. He also said that Russia has already developed an export version of the system, which will be named Abakan. [source] 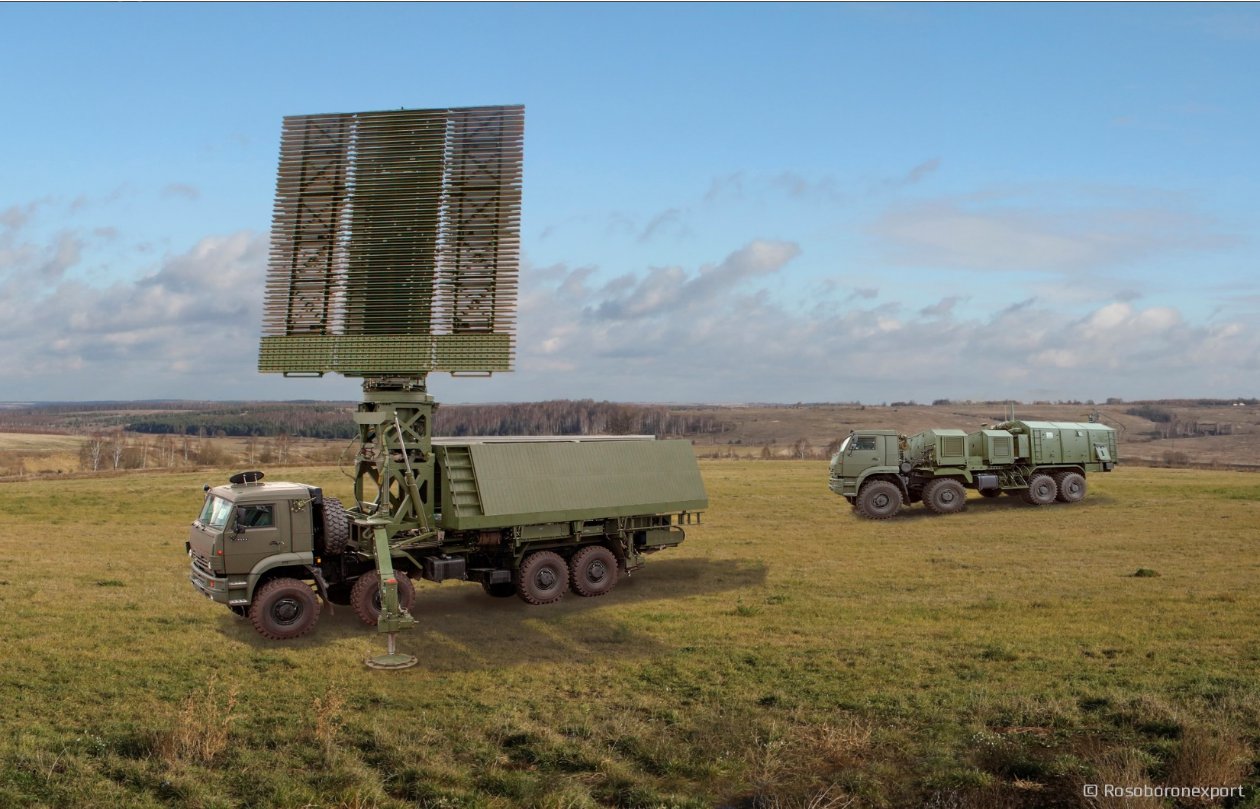 via Twitter
In June 2020, TASS reported that Russia's Rosoboronexport has started promoting on international arms markets the 59N6-TE mobile radar capable of detecting hypersonic targets, the company’s press office reported on Thursday.
"Today Rosoboronexport is bringing to the market the latest radar station capable of effectively detecting a wide range of advanced and future air objects, including hypersonic targets," the company’s press office quoted Rosoboronexport CEO Alexander Mikheyev as saying.
"While developing the export version of the radar, the growing role of air defense systems for the provision of security of states was taken into account, as well as the needs of foreign customers in the expansion of the reconnaissance capabilities of their air defense units," he said.
The 59N6-TE mobile three-dimensional station is an exclusively Russian-made product, which implies present-day Russian hardware components with digital processing and signal generation. It is fully solid-state and has high potential together with enhanced jamming resistance, according to the data posted on the company’s website.

via Twitter
"The 59N6-TE is a radar of medium and high altitude, having a decimeter wavelength range. Apart from hypersonic targets, it also effectively detects aerodynamic and ballistic objects," the statement says.
The 59N6-TE radar provides for the measurement of the range, azimuth and altitude of aerial targets. It is capable of detecting objects flying at a speed of up to 8 000 km/h at a range of up to 450 kilometers and at an altitude of up to 200 kilometers. After detection, it exchanges radar information with C4I systems. It operates in conditions of jamming and carries out direction finding of active noise jammers, Rosoboronexport said.
The station has an automatic and a semi-automatic mode of aerial targets’ acquisition and tracking. "In a real time mode, it can simultaneously track no less than 1 000 objects and recognize 8 classes of targets, which includes selection of anti-radar missiles and warning its own combat crew of the danger of elimination, inter alia, by high precision munitions and homing missiles. The 59N6-TE radar also includes equipment for the recognition of detected aerial targets in international radar recognition systems Mk-XA and ATC RBS," the company said.
The 59N6-TE radar set includes an antenna-hardware complex and an indicator post, placed on a standard vehicle chassis of the “KAMAZ-6560” type. There are also options to place the item on a single vehicle chassis, deploy it in a stationary version or to place the radar antenna system on a high tower support and other installations. Besides, the station is equipped with remote operator’s work stations, which may stay at a distance of up to one kilometer from the indicator post if connected via glass fiber links, and up to 15 kilometers in case of using a radio link.

In February 2020, Izvestia reported that Russia is designing an ultra-long-range air-based missile capable of intercepting high-speed and maneuvering targets. The weapon is designed to engage hypersonic aircraft and cruise missiles.
The missile is being developed for carriage by MiG-31 interceptor and its planned successor, the MiG-41. According to Izvestia, one of the candidates for the role of submunition is the medium-range missile K-77M.
The heavy long range missile will deliver a warhead with several modern air-to-air missiles over a distance of several hundred kilometers. The submunition missile will then separate from the carrier and begin to search and attack targets on their own using active homing.
Typically, an air-to-air missile has a single warhead and the chances of a lone warhead failing to successfully engage a hypersonic maneuvering target are very high. Using several active homing submunition missiles would increase the chances of a successful head on engagement.
The U.S. uses a similar approach for ballistic missile defense against ICBMs. Interceptor missiles launch “kill vehicles” with multiple warheads, each equipped with sensors as well as thrusters for rapid maneuvering. The submunition missile will disperse at a pre-calculated range to cover a larger area in a head on engagement.
The use of a single information space would make the interception more effective. Ground-based radars, early warning radars, or an attack warning system could detect aerial targets, cruise or hypersonic missiles and transmit target information to an airborne MiG-31 which could launch an ultra-long-range missile towards the target area while itself staying well out of harm's way.

The Rezonans-NE VHF counter-stealth early warning phased-array radar is designed to effectively detect a wide range of current and future air targets, including low-observable cruise and ballistic missiles, hypersonic aerial vehicles, as well as stealthy ones, in severe electronic countermeasures (ECM) and clutter environment.
Rezonans radars operate in the meter band and employ the principle of wave resonance, which allows detecting aircraft based on stealth technology and also hypersonic targets flying at a speed of up to Mach 20. The radar is capable of detecting targets and issuing target acquisition on aerodynamic targets at a distance of 600 km and at a range of 1,200 km on ballistic targets, at an altitude of up to 100 km.
Russia's Northern Fleet already has 3 Rezonans-N in service as in February 2020: 2 in Arkhangelsk and 1 on Novaya Zemlya. According to an OPK source, two Rezonans-N radars will be deployed to the Kola Peninsula in the Russian Arctic in 2020.
Posted by Vijainder K Thakur at 5:40 PM