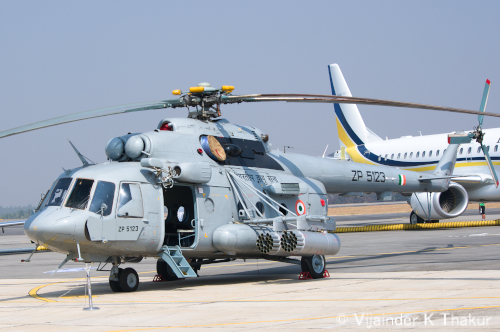 
Russia has completed delivery of 19 Mi-17V5 helicopters against a follow-up order for 59, reports RIR.

Russia completed supplies against the initial order of 80 helicopters in 2013.

The contract for the initial order of 80 helicopters was signed during Russian President Dmitry Medvedev's visit to India in December 2008, India and Russia had earlier negotiated a price of $650 million, but early in 2008 Russia asked for a revision of the contract price to $1.2 billion.

The deal also envisaged a $405 million "offset" obligation by Russia.

The contract for the follow-up order was signed during Russian President Vladimir Putin's visit to India in December 2012.

The new choppers have replaced the 50 Mi-8s in service with the IAF and augmented IAF's capability to support high-altitude posts in Siachen and Ladakh sectors.
Posted by Vijainder K Thakur at 10:12 AM