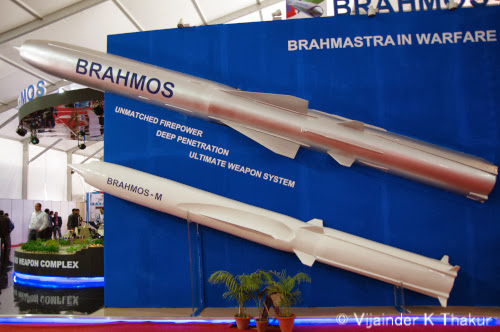 Brahmos aerospace officials first announced the Brahmos-M as a concept at DefExpo-2012.

Brahmos-M is the missile that Brahmos should have been - a smaller (6-m) and lighter (1.5-ton) supersonic missile capable of being launched from any medium fighter, naval ship, mobile ground launcher or a standard submarine torpedo tube.

At Defexpo 2014, Brahmos Aerospace unveiled a mock-up of the Brahmos-M, but don't go and put an Google News alert on Brahmos-M yet. The missile will be a long time coming. The mock-up notwithstanding, the missile is still a concept.

The problem with developing Brahmos-M is - developing the smaller ramjet engine that will power the missile.  India has yet to locally manufacture the ramjet that powers the Brahmos, over 9-years after the first test launch of the 'jointly developed' missile.

Russia is committed to transfer the technology to manufacture the Brahmos ramjet to India, but it hasn't happened. Either due to Russian reluctance or Indian inability, perhaps both, the TOT remains on the to-do list.

Without an engine, the detailed design of the Brahmos-M cannot be frozen. IDP understands that BATL has been tasked with developing the Brahmos-M engine. BATL's skill are in manufacturing rocket and missile components, not designing new engines.Hopefully BATL will develop a ramjet for the Brahmos-M with assistance from Russia and Indian academic institutions. Till that happens, or Russia coughs up a ramjet after seeing India struggle with the project, Brahmos-M will remain a concept.

For more on the Brahmos-M please see the link below