The laboratory recently released a RFP for development of ceramic nozzle for the ramjet combustion chamber.

The throat diameter of ramjet nozzle directly affects the performance of ramjet propulsion system. Any erosion of ramjet throat adversely affect the ramjet performance. A ceramic nozzle would minimize erosion and facilitate long duration flight. Also, a ceramic nozzle would   ensure that temperature of metal casing and insulating materials remains within acceptable limits for long duration of operation of ramjet combustion chamber.

The configuration of the ramjet system is similar to the solid propellant ramjet - solid booster combo engine that powers the Akash missile. 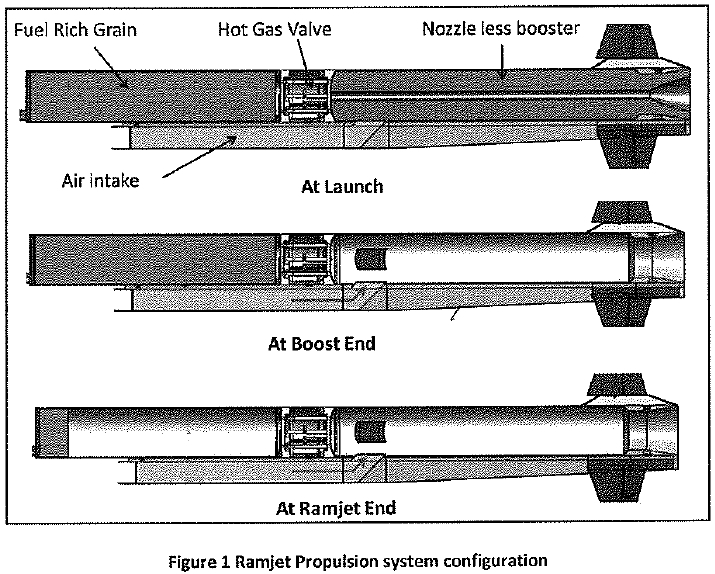 The ramjet combustion chamber initially houses solid propellant for boost phase. In other words, the propellant is cast inside ramjet combustion chamber. The booster propellant is required to be configured in such a way that it acts like a nozzle less booster. Towards the end of boost phase, the ceramic nozzle will also encounter the combustion products of booster propellant though for a very short duration (0.5 sec). It is important that the ceramic layer of the nozzle bonds strongly with the propellant. If required a suitable suitable adhesive is used to provide required bond strength.


The requirement for high energy and long duration suggest a ramjet engine is being developed for a bigger and longer range missile than a Akash follow-up variant.

It maybe noted that Brahmos Aerospace is in the process of developing Brahmos M, a smaller 1.5 t variant of the 2.5 t Brahmos missile. Brahmos-M would be capable of launch from any medium fighter, ship based missile container, submarine torpedo tube or land based missile container. Brahmos M would require a smaller ram-jet engine than the one fitted on Brahmos. Also, in order to make Brahmos-M suitable for launch from submarine torpedo tubes, the missile would need a solid fueled ramjet instead of the the liquid fueled ramjet fitted on Brahmos.

Is DRDL de
Posted by Vijainder K Thakur at 10:27 PM